I painted these shoes for Illustration Friday's prompt, which is "Shoes", in honor of my favorite pair of shoes and, well, they're orange and sunny and fun, so there's that too. Oh, and a dog, because you know dogs are awesome!

What are your favorite pair of shoes? And/or are you a cat lover or a dog lover?

Happy Saturday! I've been on another Balloon Lift Off paint play adventure with the red balloons, the girl, and the dog. This one grew into WILD the #scbwidrawthis prompt for August. It started with a bunch of trees, some hills, the balloons, girl, the dog, then one cave popped up with a mama bear outside and her cubs inside, then more caves, more bears, and what to do bears love? Honey. So, in came a bear eating honey from a beehive, and more beehives, and bees. So, yep, wild. And I'm left wondering how the dog will get through all those bears and bees to follow his girl.

I hope you're enjoying this wild journey! If you have suggestions of where you'd like to see this balloon adventure go, feel free to comment with your ideas.

Balloon Lift Off 4: The Lighthouse

I usually post my paint play inspired by Colour Collective earlier, but I'm a bit late this week since I have a tight deadline with sketches to finish for a book for Pelican Publishing (more on that later).

I stole a few minutes (okay, more than just a few) from my sketching time to paint another adventure with the the red balloons using Cordovan as the color inspiration to post to #colour_collective on twitter. I'm trying to keep a logical storytelling sequence to this series, so I also used the teal ocean color from last week and have the girl being swept in from the ocean this time.

Did she travel across the entire sea? I shrug. Perhaps. I was going to paint her in the middle of the ocean with the dog on a boat (which you can see a peek at the dog in a boat possibility with the time-lapse video on instagram), or passing a Cordovan colored pirate ship, but this is what came out when I put finger to iPad with Procreate. I go where the wind takes me, so to speak.

The first image is what I posted for #colour_collective, and the second one is because I felt I needed to push the lighting a bit more, so I spent a bit more time with it. Which one do you like better?

Balloon Lift Off 3: Swept Away

The red balloons are still flying.

This week I was inspired to continue with my Balloon Lift Off series with Swept Away inspired by #colour_collective weekly color Vert Réséda as the background color, which screamed ocean to me. Once again, the color inspired the art and the balloons won't let me go, so this is what happened:


Will she ever land? What will she see in her travels? How will her dog keep up if she is swept out to sea? Stay tuned, I'm sure there will be more of their story unfolding here. Have an adventurous weekend everybody!

I’m happy to say that Fred is finally ready (again) and has ventured out into the wide world all shiny and new.

I revised and polished the manuscript, sketched out the dummy and completed (or should I say, redid and reillustrated) three samples spreads and it is now out into the world for consideration by agents and editors. Whoopee! And to tickle your curiosity, it is being seriously considered somewhere. To be named later if it comes through.

Don’t Fret, Fred is a wild romp of a tale in which Fred discovers that exciting things can happen when you look up from your e-things and use your imagination.

This story has pretty much always been about that. Even though the journey has meandered to and fro, the heart of the story, the bare bones of a bored kid, Gram knitting and telling a wild yarn which spins out of control and Fred having bring them home has remained the same. Gramps has always been like, here we go again. The happenings, the specific interactions has changed, but the core has remained the same.

This picture book has gone through three major revisions (not to mention the many, many edits, and fussing with words, paragraphs, spreads.) I sent out the manuscript alone many years ago. I got personal rejections with editors who liked the humor but felt there wasn't enough there to pass the last hurdle to acquire it. After a pile of rejections, I put it in a drawer where it sat with all those rejection letters for a looooooooooong time.

My nephew stirred interest again when he casually said one day, "don't fret, Fred." He remembered the fun repeating line from my book from when I read it to him years before. That gave me heart. I pulled it back out, reworked it with my husband and business partner and my wonderful crit buddies (where would I be without their invaluable input?), and I hammered away at it till I got something I was happy with again.

So, good to go, I created a dummy book and finished sample illustrations. 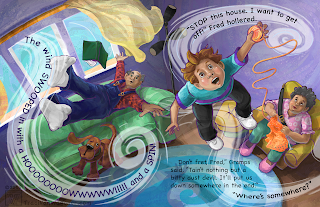 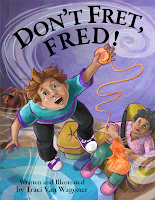 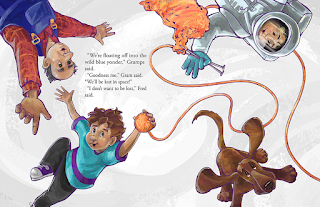 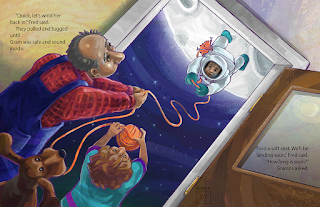 Fred had his debut showing at the SCBWI Winter Conference in NY, I also sent it out to to editors, agents, and hit the twitter pitch parties. I received some interest here and there, but I wasn't quite happy yet and neither was anyone who saw it. Something niggled at me, but I couldn't quite put my finger on it. In one of the twitter parties, I saw someone was interested in a book with yarn bombing and -- boom! -- the seed of an idea was planted. Then taking a walk in my neighborhood (on what we call the chicken walk) I came across this:


And the idea clicked. That’s what I needed! Gram is a yarn bomber. I went back to work.

A new manuscript, dummy book and sample illustrations were born now with a yarn bombing gram. You see her behind the scenes yarn bombing all the places they land, which in the end gives Fred an idea to help bring them home. I think this has tied it all together with humor, surprise, and a bucket load of imagination 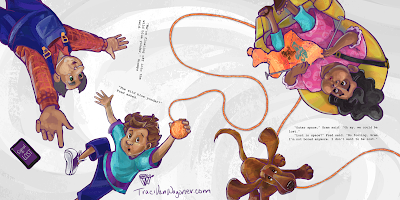 Okay, I was done. Sent out some more and received a smattering of interest. Then I received a great comment on twitter from Guiseppe Castellano which basically said (I can’t find the actual comment), “fun, but strange there are purple outlines.”

This was something that had been niggling at me, but I’d ignored for many reasons. It was an illustration style I liked and had developed for various reasons which I won’t go into here. I came to a conclusion that I needed and should and wanted to redo the final illustrations yet again. I wanted to loosen up and have fun just painting and breaking free from a conception of what my style was or should be. So I did, and I had a ton of fun. And this is what happened. 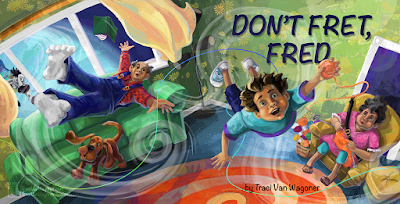 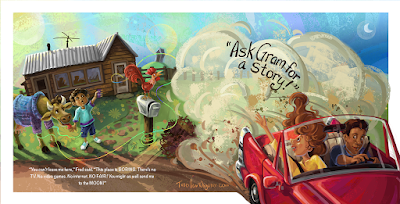 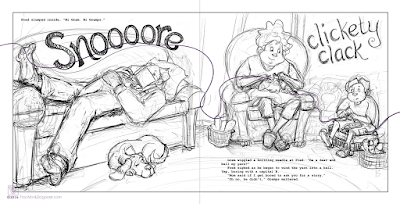 There you have it, the basic progression of this book. It's been a long road, and now I hope I'm at a point where others will enjoy it too and someone will be willing to take it on. One can hope.

And here's my query schpill: 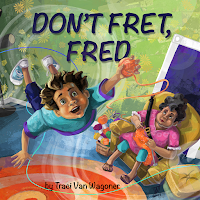 Cut off from the electronic world, Fred is worried a day with Gram and Gramps in the boonies will be boring. Boy, was he wrong. While balling Gram’s yarn (yawn!), he asks her for a story. Crazy and out-of-this-world things begin to happen, spinning them up into a wild yarn of an adventure bigger than all of them. Fred will have to use his rusty imagination to get them back home before they are lost in space.

I would love to hear what you think of Fred and his yarn bombing Gram. And please feel free to share any pictures or stories you have of yarn bombing in your neighborhood.


If you'd like to see more of my illustration process, click here to see the making of The Mermaid's Gift by Claudia McAdam, published by Pelican Publishing.

Thanks ever so much for sharing in my journey.

Balloon Lift Off 2: Up, Up and Away

I had so much fun with the red balloon painting I did last week for #colour_collective and had a big positive response to it,  I decided to do another painting in continuation of the balloon lift off story.

Up, up and away she goes! Where she lands, nobody knows!

I shared an earlier (not quite done) version of this piece on twitter and instagram since I had other work to finish and wanted to get it up on time to share with the rest of the @colour_collective community. I've noticed that the art I create on the iPad is brighter than when I share it online. So I brightened it up and added a lighter sky and more highlights to this version. Color consistency in our digital world is tricky.

Stay tuned, I may just share more of this girl's (and her puppy's) journey. In fact, I'd love to hear your suggestions and thoughts on where she might land and what she sees along the way. Enjoy the balloon ride.